It seems obvious that radical measures are going to be needed to redress the growing problems that the world faces with regard to issues such as climate change and potential food shortages.

The fact is, the human population continues to increase. That alone would present a formidable problem, but when climate change is added to the mix it becomes even more challenging. Although many will look to technology to provide the solutions it would be foolish to assume that, despite the track record of ingenuity that the human race has displayed in the past, technology alone could be our saviour; moreover, technology needs to be channelled by something more morally accountable than market forces.

Recent events, stepping perilously close to economic (and in places social) meltdown, have proven that capitalism can’t be trusted to provide the solution. When the pursuit of profit is the main driving factor the ‘best solution’ won’t necessarily be adopted. Unfortunately, large proportions of the developing world are adopting the capitalist model too, for it provides an attractive material standard of life for the lucky ones - at the expense of the less fortunate, and also at the expense of long-term global balance. It seems obvious to many experts that the human race is eating up natural resources at an ultimately unsustainable rate, whilst correspondingly adding to the pollutive soup that threatens the

Towards A More Globalised World?

world’s ecological viability. In addition to the shortcomings of capitalism there are other factors, such as the diversity of political and religious systems around the world that stand in the way of, and ultimately threaten, global sustainability.

In the longer term it would seem wise to look to some form of world government to conciliate and mobilise all these diverse forces and interests. Some would look upon the model of the European Economic Community as a reason to avoid this at all costs: despite its lofty aims it has acquired a reputation for being intrusive, interfering and unwieldy - to name just three adjectives. But can we trust the current model, or rather mishmash of disconnected political, religious and economic models, to guide our way through the future?

Perhaps one major reason political structures such as the EEC Assembly, as well as many nation state governments, fail to work effectively is the lack of democracy: a governing body is often either autocratic or only relatively democratic where, in effect, an elected body assumes a mandate to determine policy for their electorate when in fact, at anything other than a crude macro level of government, they do not have it, and as a result are often at odds with what the electorate actually desires. However, modern technology raises the potential for a much more ‘hands-on’ democracy where, rather than the electorate voting an Assembly of so-called representatives in for an agreed term and then having very little input until that term expires, individuals could cast votes directly for each individual issue through the use of, for example, computer terminals smartphones. Potentially, this could do away with most politicians altogether, to be replaced with bodies of representatives whose role it is simply to enact the decisions made by the electorate as a whole. It goes without saying that such devices as technology-driven democracy is open to abuse and corruption, and would certainly require a robust system of checks and balances that includes the right of any individual or body of individuals to query and scrutinise the system and the results it produces. Such ideas nevertheless provide the potential for making a real democracy of the people feasible.

Many would fear that a move towards some form of ‘world government’ would result in some nightmare ‘Big Brother’ scenario, and serve simply to wash away all the idiosyncrasies that make the mosaic of societies around the globe so diverse and, consequently, so culturally rich. However, this needn’t be so: it would be a question of restraining the mandate of such a government, making it fully accountable to all the citizens of the world whilst at the same time allowing a high degree of localised community-led government (micro level copies of the global whole), and nurturing the desire to both preserve and celebrate all that is morally good in both regional and individual diversity. (Again, the definition of ‘morally good’ is something that would need to be arrived at through thorough, open, and truly democratic debate). In its best form, where government was a true democracy of the people, it could actually lead to a higher level of individual freedom than most people currently enjoy. It could certainly help to regulate the political corruption, economic self-centredness and religious fanaticism that currently serves groups of vested interests rather than the masses. It would hopefully also gradually break down the social and cultural barriers that have caused so much turmoil and bloodshed since time immemorial, and that continue to do so with each passing hour. Maybe cultural diversity would break down naturally, over many generations, if that’s what the peoples of the world really wanted, to be replaced by a more homogenous culture where the best of all has been assimilated into a greater whole. No political, economic, or religious self-interest group, however, can ever be allowed to determine what that ‘best’ is; only the peoples of the world themselves in a true and wholly representative democracy.

There will certainly be a large number of those that read this that will seriously doubt the arguments put forward above, and would counter that democracy itself is unworkable, and never more than a veneer to appease the masses whilst a corrupt and largely hidden elite at the top bypass it to accrue an unfair share of power and wealth. They might also object that even democracy doesn’t fulfil the needs of all the people, only the majority. An alternative that some of these opponents would put forward is some variation of anarchy, where all forms of hierarchical authority are removed. There are in effect many diverse subcultures of anarchism, some of which propose a non-hierarchical collectivism that is not totally at odds with the form of democracy discussed in the preceding paragraph. Anarchism is itself fraught with many challenges, not least of which is arriving at a model of anarchism that will satisfy everyone (and if it doesn’t, then it could be argued it is no better than democracy in some regards). Additionally, in the more extreme forms that propose complete individualism a constant tension and turmoil would seem inevitable in that, although it resolves the aforementioned criticism of democracy only pandering to the needs of the majority, it potentially replaces it with a selfishness that ultimately negates far more freedom than it creates, especially for the weaker members of society, and which could result in something actually worse than what we already have. Nevertheless, anarchism certainly offers another alternative to the corruptions of capitalism, corporatism, and corporate statism that have so sadly failed us in the present day, and in some forms could be viable, and not totally at odds with the objectives of democracy. Due to the great complexities of anarchism this is a subject that merits separate in-depth analysis in a future article.

All of these ideas are, of course, components of a lofty vision that are radical by the conventions of the day, and which will instil fear, doubt and resistance in many. No radical change can ever be made overnight - not, at least, change that is lasting, and untarnished by the blood of those who seek to resist it. It would probably take many generations to break down the barriers between all the entrenched political and cultural factions around the globe. But perhaps we live in an age where, due to the way in which global communication, and in particularly the world wide web, is (in an unmanipulated state) capable of breaking down those barriers more rapidly, by educating us all and affording everyone a more global vision, and at the same time providing the technological tool for us all to have a greater say in the world at local, regional, and even global levels. Indeed, the Web is surely doing just so at this very moment in time, although the social unrest that is in part a consequence is very much a mixed blessing, due to the associated bloodshed and the rumblings of a reactionism from existing governing bodies that already threatens the freedom and embraciveness of the Web itself, and hence its capacity as a force for positive change.

Perhaps, all said and done, mindful of the potential consequences of adverse climate change and potential world food shortages (such as cataclysmic global war), it is time to at least start to make inroads into some means of attaining global harmony, that will inevitably have as an essential component a far more egalitarian distribution of wealth and resources, regardless of the immense challenges that stand, seemingly implacably, in the way.

Illustration: The WOMAD Festival brings together diverse cultures from all around the world to meet in a spirit of harmony.

Article first uploaded to the original version of the website in 2013. Last revised on 13-10-2014. Subject to further editing. 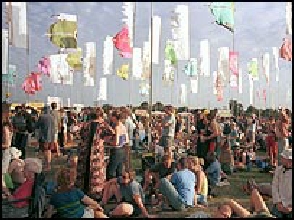